While Americans agree that child abuse and neglect is unacceptable and are more likely than ever to consider child development an important policy issue, it can be difficult to build the public understanding and political will we need to effectively prevent, identify, and address childhood adversity. As communicators, we still encounter persistent dilemmas in deciding what to say, how to say it, and what to leave unsaid.

Understanding the need for fresh, powerful framing strategies, Prevent Child Abuse America and the newly merged Alliance for Strong Families and Communities and Council on Accreditation asked the FrameWorks Institute to update framing recommendations that have served our field well since 2004.

The result is a new strategic brief, FrameWorks Institute: Reframing Childhood Adversity: Promoting Upstream Approaches.  This new report is a critical new tool in Colorado’s toolbox for communicating to strengthen families that have guided the development of messages hosted on this Colorado Shared Message Bank. 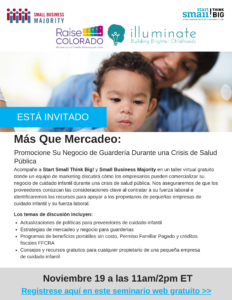 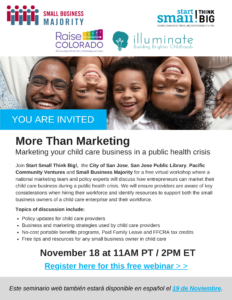 Join Start Small Think Big! and Small Business Majority for a free virtual workshop where a marketing team will discuss how entrepreneurs can market their child care business during a public health crisis. We will ensure providers are aware of key considerations when hiring their workforce and identify resources to support the small business owners of a child care enterprise.

Topics of discussion include:

A 15 minute question and answer period with marketing experts will follow. 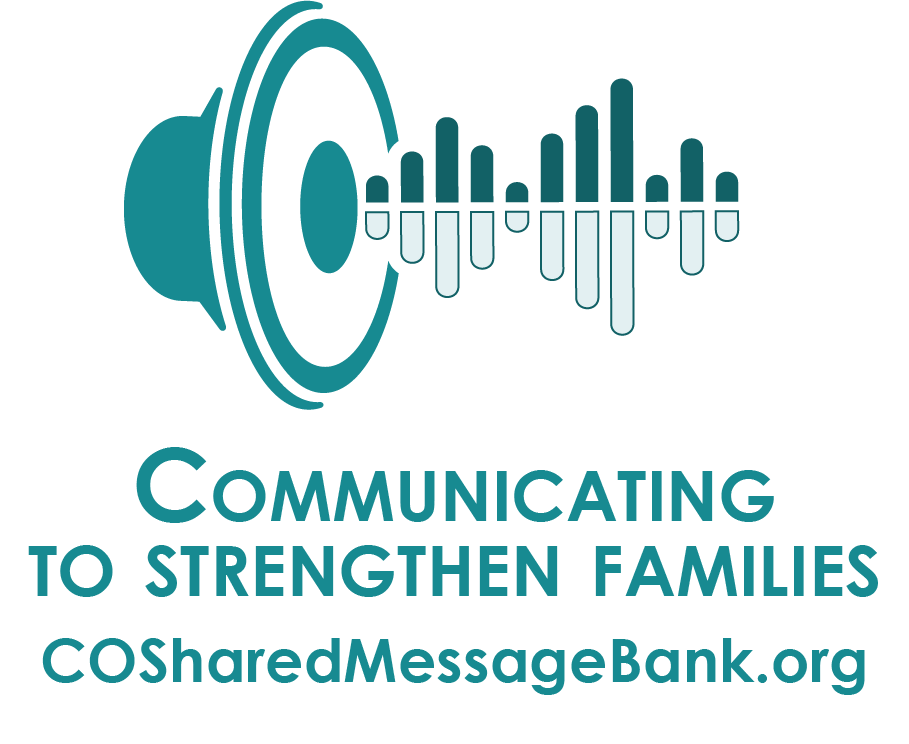 As many in the early childhood community know, the Early Childhood Colorado Partnership (ECCP) worked intentionally to advance the shared goals within the Early Childhood Colorado Framework for many years. Developing and sustaining a comprehensive early childhood system with children and families at the center was no easy task, and no one individual, organization or agency can do it alone. Together, their collective efforts facilitated numerous engagements and tools that continue to support families and organizations today. However, with numerous organizations focused on early childhood health and education, the ECCP Steering Committee decided earlier this year to discontinue the work and create space for others to grow and thrive.

As the ECCP dissolved, Illuminate Colorado, a statewide 501(c)3 organization dedicated to strengthening families, organizations and communities to prevent child maltreatment, has stepped in to ensure that the Colorado Shared Message Bank and the community that ECCP supported for communicators focused on promoting research-based frames and messages proven to garner broad public support for issues connected to healthy early childhood development, the prevention of adversity, mitigation of toxic stress and promotion of resilience and strengthening families continues to exist and grow into the future.

The Colorado Shared Message Bank is a critical tool in the toolbox to aid people in shifting community norms, perceptions and policy toward embracing the importance of investing in children and strengthening families and communities. It is also product of a collaborative effort of many people trained to support partners around the state as they work to integrate the Shared Message Bank and communications best practices into their communications efforts with and on behalf of children and families. These mentors review partner materials and offer advice on framing to promote social change or engage Coloradans in services that strengthen families.

As additional frameworks to support maternal health and child maltreatment prevention have been created in Colorado and the community focused on improving communications practices begins to reconvene to share what is working and learn from one another, Colorado offers a message of gratitude to the Early Childhood Colorado Partnership for providing the space and conditions for diverse partners across the comprehensive early childhood system – encompassing health, mental health, family support and early learning – to come together to identify common results, share best and innovative practices, and implement strategies to improve system effectiveness for and with child and family well-being.

Join the community of communicators to find support in promoting messages that strengthen families.

Promoting safe sleep is the easiest it has ever been thanks to the NEW 2020 SIDS Awareness Month #SafeSleepSnap Digital Toolkit. 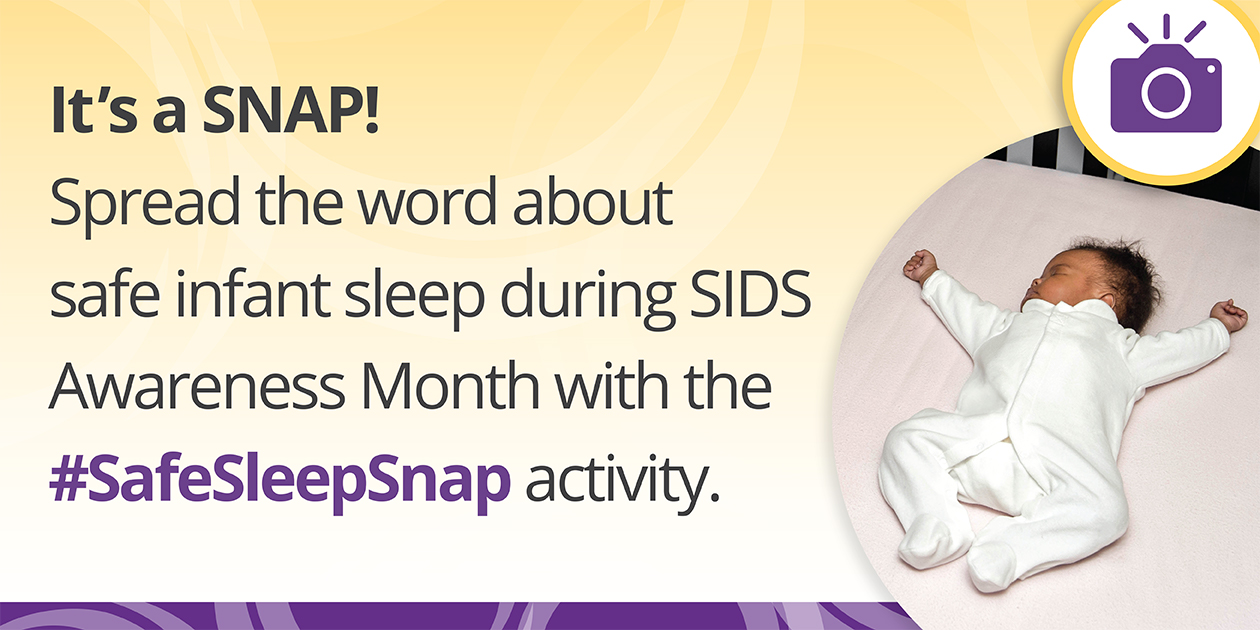 In this toolkit, you’ll find:

Each week in October 2020, the national Sudden Infant Death Syndrome (SIDS) Awareness Month campaign, encourages a focused message on one action to help reduce the risk of SIDS and promote safe sleep. Coloradans are encouraged to participate in each weekly theme to help spread the word about key safe infant sleep practices.

Visit the See the Sample Posts and Language sections for suggested messages to post each week.

Always place baby on his or her back to sleep to reduce the risk of SIDS.

Use a firm and flat mattress in a safety-approved crib,* free of soft and loose bedding, such as bumpers, stuffed animals and blankets.

*A crib, bassinet, portable crib, or play yard that follows the safety standards of the Consumer Product Safety Commission (CPSC) is recommended. For information on crib safety, visit https://www.cpsc.gov or contact CPSC at 1-800-638-2772.

Share your room with baby. Keep baby close to your bed but on a separate surface, for example, in their own crib or bassinet.

Breastfeed to reduce the risk of SIDS.

The Kindergarten NOW! Coalition is a group of partners working to advocate for fully funded full-day Kindergarten for all children who choose it in Colorado.

The coalition utilized the All Together for Prosperity messaging as their headline for why Colorado needs to invest in full-day Kindergarten.

This video was crafted through a partnership between Colorado Project LAUNCH and the Early Childhood Colorado Partnership.

Organizations serving children and families are increasingly focusing on family engagement as a strategy to improve services, enhance consumer and provider satisfaction, and reduce costs. This video highlights the voices of two family members of the Project LAUNCH Young Child Wellness Council. The Council exists to bring families and public and private partners together to improve policies, programs, and approaches so that all children enter school with the social, emotional, cognitive, and physical skills they need to succeed. As this five-year grant comes to a close, family members are eager to share their experiences with those interested in systems level initiatives.

Director of the Young Child Wellness Council, shared her recommendations for professionals and family leaders seeking to increase authentic engagement:

1)  Personal experiences are what drove both Ray and Princess to their initial involvement. Bringing these experiences to the table is integral for success.

2)  Joining councils and boards can be uncomfortable initially for a family partner. Connecting w/other professionals and feeling supported and heard allowed them to feel valued and kept both of them committed to the work.

3)  Professional partners need to hear the voice of fathers.

4)  It’s okay to start small.  Begin w/volunteering in your child’s classroom, take advantage of other opportunities as they open up.

5) Be willing to take risks because your voice matters! Join a committee, attend conferences, and apply for boards.

6) This is a chance to revolutionize the way services are delivered!

ABCD updated its website and messaging and used the Shared Messages and Photo Bank to inform the changes. The About Us section of the website includes prosperity framing and explanatory language around the importance of child development. ABCD has also developed messaging which explains what developmental screenings are to support building understanding and clarity for those outside of the field.

In addition to the messages, ABCD incorporated the Guidelines for Visuals and the Photo Bank to inform stock photos on the website.

In 2015, the Colorado Department of Human Services, in partnership with more than one hundred and fifty community partners throughout the state and Governor Hickenlooper, launched a multi-year Colorado Child Abuse and Neglect Public Awareness Campaign to engage all Coloradans in the prevention of child abuse and promote the new Colorado Child Abuse and Neglect Hotline 1-844-CO-4-KIDS (1-844-264-5437).

Coloradans think Child Abuse and Neglect is a big problem. Why do we need to raise awareness?

To build an evidence-based public awareness campaign, the Department conducted public opinion research in 2013 which serves as a baseline measurement for the effectiveness of the Colorado Child Abuse and Neglect Public Awareness Campaign. According to research, Coloradans were well aware child abuse and neglect is a problem, believing that one in four children experience abuse or neglect. More than half of Coloradans said they had personally encountered a child that they suspected was a victim of abuse or neglect and they said that they were very likely to report a litany of typical abuse and neglect situations.

We all play a role in strengthening families in… (Highlights from press event for Child Abuse Prevention Month, April 2018)